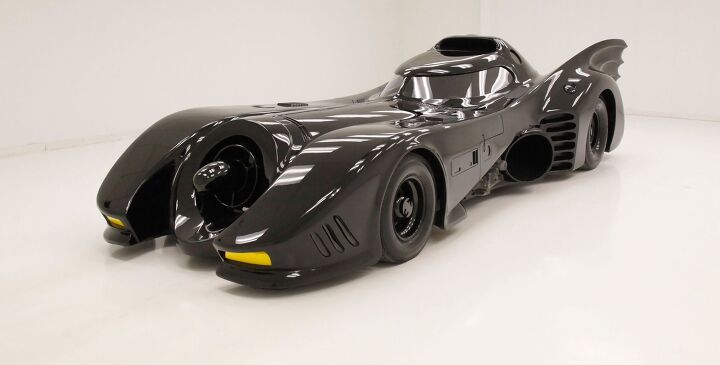 The Batmobile from the Tim Burton era of films (Batman and Batman Returns) is on sale, though you’ll still need access to Bruce Wayne’s fortune if you’re interested in buying. This particular movie car is being priced at $1.5 million – likely due to it being one of the more influential designs.

While there were real-world examples of the Batmobile prior to the 1950s, they were all ordinary cars that Batman happened to have lying around in his massive garage. This matched what was going on in the original comics, which were more grounded in his work as an investigator and often were interlaced with car chases and Batman shooting people or pushing them out of windows. But things gradually became more fantastical, with the character tossing his gun away for gizmos, gadgets, and the coolest custom cars imaginable.

Batman had become a household name by the middle of the twentieth century, so DC Comics wanted a vehicle to be used for promotional events and brand tie-ins. Based on a 1956 Oldsmobile Rocket 88, the heavily modified car was more representative of the bat-themed vehicles that had started to dominate the comics. But it was immediately eclipsed by the rig commissioned by 20th Century Fox and William Dozier’s Greenway Productions to become the Batmobile used in the 1966 TV series (and later movie) starring Adam West.

Based on the Lincoln Futura, this was the first car to incorporate features directly from the hero’s adventures in print and established staple items for subsequent Batmobiles – most notably its afterburner. Despite arguably being the most desirable of all Batmobiles (the vehicle fetched $4.2 million at a Barrett-Jackson in 2013) its successor is likely the model that ended up being the most copied. Used in Batman (1989) and Batman Returns (1992), the Burton-era Batmobile is heavily modeled after cars from the comics in addition to its real-world predecessor.

Built on a Chevrolet Impala chassis, the overall design was done by conceptual illustrator Julian Caldow to help match the Art Deco and gothic vibes of Gotham City preferred by the film’s director – though the car itself was built by John Evans special effects team at Pinewood Studios. A few different versions of the vehicle were made (with variants between movies) but the overall design remained consistent. It also happened to be incredibly popular and was often seen making appearances in the comics and popular media referencing the Batman franchise through the 2000s.

The 1989 Batmobile likewise served as the template for the vehicle used in Batman: The Animated Series and became the jumping-off point for the undeniably phallic Batmobiles created for the Joel Schumacher films (below).

As for the model that’s currently up for auction, the listing explains it as one of the prop cars incorporated into the Six Flags Great Adventure’s version of Batman: The Ride after its filming duties had been completed. The consigner of the auction reportedly purchased the car directly from the amusement park and already has a vast collection of film vehicles.

Desirable features are said to include authentic Daytona Prototype fender panels, 15-inch custom wheels wrapped in Mickey Thompson rubber, air-ride suspension, and a faux central jet engine turbine. Though the car can still belch real fire from the back using the installed flamethrower ( here’s what that looks like in the movie). Another unique aspect is that the car is actually driven from a third seat that can be hidden for filming purposes. That presumably means the driver-side controls are entirely for show – though the listing doesn’t go into great detail.

Don’t become too disheartened if you don’t have $1.5 million laying around, however. As a prop car that didn’t need to do much fast driving in the movie, this Batmobile isn’t capable of exceeding any speed limits that exist outside of a school zone and isn’t street legal anyway. The powertrain consists of a 48-volt electrical system and is supposed to top out somewhere between 25 and 30 mph. Though even that could be unrealistic because the listing explains that the batteries haven’t been charged since “approximately 1993,” and are assuredly rotten. It’s actually a little surprising that the seller hadn’t replaced the power source considering the high asking price.

It’d be nice to have more information on the powertrain, frankly. But it’s probably safe to assume you’ll need to be doing some work if you want to drive in any parades. Classic Auto Mall simply said that it didn’t mess with it due to how long it had been since the car was charged, adding that the company “didn’t want to risk a failure or fire.”

Become a TTAC insider. Get the latest news, features, TTAC takes, and everything else that gets to the truth about cars first by  subscribing to our newsletter.