There is little arguing against the notion that today’s vehicles are far cleaner for the environment to operate than those of yesteryear. Of course, reaching this level of cleanliness was not achieved overnight. In fact, efforts to reduce the internal combustion engine’s carbon footprint began in the early 1970s, when a host of new environmental legislation came to light.

One of the most significant of all anti-smog-related components to have been introduced over the past several decades is the catalytic converter. This component serves to break down environmental pollutants before they ever make their way out of a vehicle’s exhaust pipe. One can now find one or more catalytic converters on every new automobile produced during the modern era.

Unfortunately, catalytic convertors do not feature an infinite service life, even though they tend to be relatively hearty by design. In many cases, a catalytic converter will require replacement, at least once within a vehicle’s effective lifespan.

Luckily, diagnosing a faulty catalytic converter can be relatively straightforward, as long as one knows what they are looking for. Read on to learn more about the various symptoms of a clogged catalytic converter, as well as how to handle such an issue, if it comes up in the future.

What Does a Catalytic Converter Do?

A catalytic converter breaks down a host of airborne pollutants that are produced as a natural byproduct of combustion before they are ever allowed to escape from a vehicle’s exhaust.

On average, the use of fully functioning catalytic converters is said to reduce a vehicle’s carbon footprint by up to 90 percent. For this reason, the use of such standard equipment is fully mandated by the federal government. An individual can even be fined for knowingly removing the equipment of this type from his or her vehicle.

Where Is It Located? 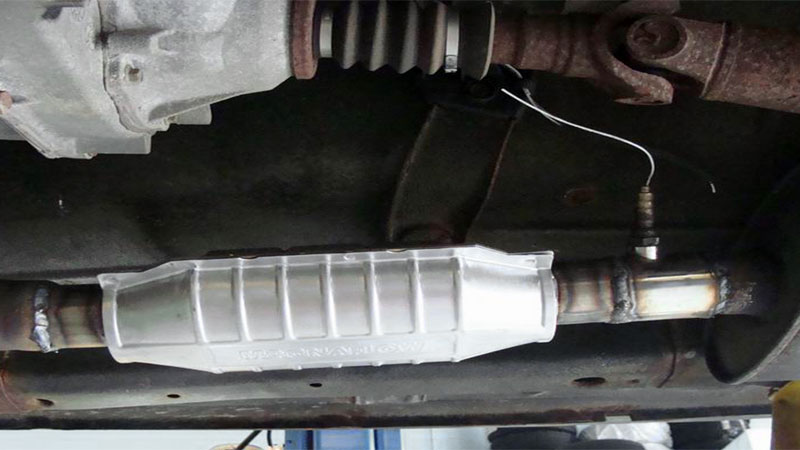 Though the terms “clogged” and “bad” are often used interchangeably when attempting to describe the state of a catalytic converter, these conditions are not necessarily one and the same.

A clogged catalytic converter is a catalyst that has become contaminated by one particular means or another, often chemically. This contamination restricts a catalyst’s flow, thereby leading to a number of secondary symptoms.

On the other hand, a less-than-efficient catalyst is often referred to as being “bad”. A failure of this type can come as the result of heavy external damage, internal degradation, or extreme wear. When a catalytic converter reaches this state, total unit replacement is the only true means of repair. Unfortunately, this tends to be quite a costly affair.

Symptoms of a Clogged or Bad Catalytic Converter 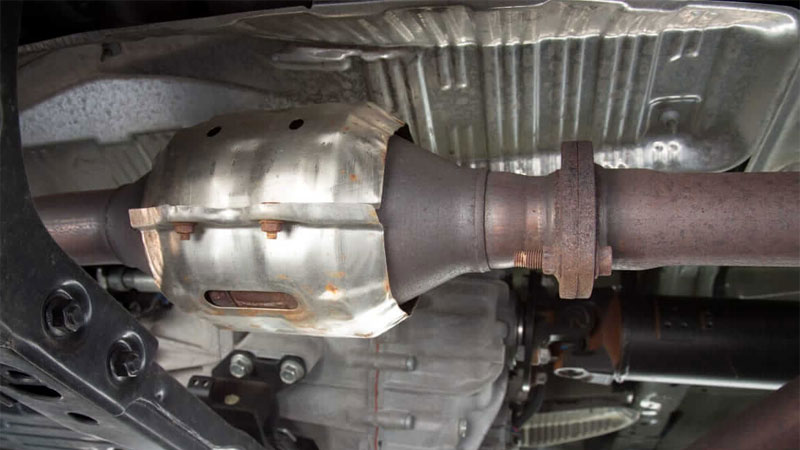 The presence of a clogged or bad catalytic converter is often accompanied by a host of secondary issues, some of which tend to be more severe in nature than others. Recognizing these symptoms can prove beneficial when attempting to correctly diagnose the issue at hand.

The following are several of the most common symptoms associated with a clogged or faulty catalytic converter.

Some of the most common of these codes include P0420 and P0430, which relate to catalyst inefficiency.

In the most severe of cases, a restricted catalytic converter can actually cause a vehicle to hesitate at start-up. This is due in large part to an engine’s inability to breathe, caused by excessive back pressure within the catalytic converter itself.

This, in turn, prevents an engine’s cylinders from exhausting with the same amount of efficiency that would otherwise be possible.

You might also notice that your engine’s performance suffers as a whole when saddled with a clogged or faulty catalytic converter. This occurs for much the same reason that an engine might experience starting difficulties under the same condition.

Excessive back pressure within a vehicle’s exhaust is always problematic, due to the restrictive conditions that it presents.

Excessive back pressure within a vehicle’s exhaust system also causes an engine to labor far harder than it would under ideal conditions. This additional work, in turn, can drastically reduce an engine’s fuel economy, causing noticeable pain at the pump.

These pieces then make a rattling noise while a vehicle is in operation, especially when the vehicle’s engine is under a load.

In almost every instance, a vehicle sporting a faulty, damaged, or clogged catalytic converter will prove incapable of passing basic state-mandated emissions testing.

This is due to a detectable decrease in catalyst efficiency picked up by a testing agency’s specialized equipment. This can prove quite detrimental when attempting to relicense a vehicle from year to year.

What Causes a Catalytic Converter to Clog Up or Go Bad?

The most common cause of a clogged catalytic converter is chemical contamination. This contamination can result in one of several different ways.

One of the most prominent relates to internal engine leakage, through which coolant or oil finds its way into an engine’s exhaust. When dosed downstream, these contaminants can quickly clog a vehicle’s catalyst.

Alternatively, over-fueling of one or more particular cylinders can cause internal catalyst degradation as well. This often occurs when a vehicle’s ignition system is not operating efficiently, thereby allowing unburnt fuel to pass through a vehicle’s exhaust. 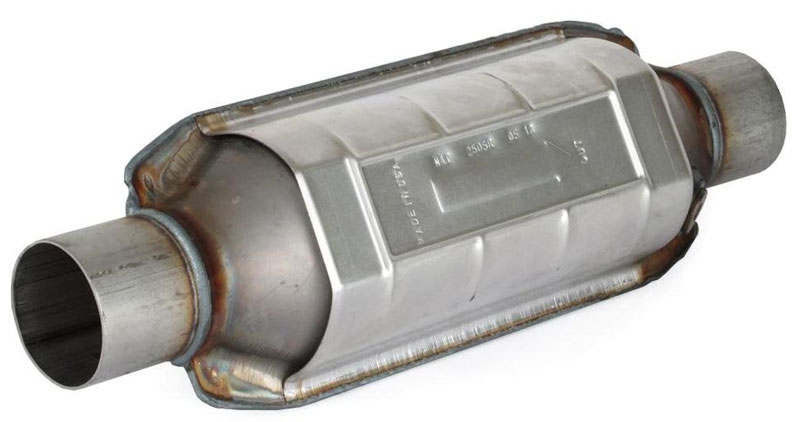 For this reason, there tends to be a significant variance in the overall cost of such repairs. However, at the end of the day, one can expect to pay an average of $1,200-$2,500.

The most substantial cost involved with this type of repair relates to the parts costs associated with purchasing the replacement catalytic converter itself. Due to its use of precious metals within its internal structure, the cost of catalytic converters has been on the rise over the past several years.

How to Test for a Clogged Catalytic Converter

One of the simplest ways to test for a clogged catalytic converter is with the use of a handheld vacuum gauge. This gauge should be hooked to a suitable manifold vacuum port for testing.

Monitor readings presented by this gauge, first at idle. Generally, these readings should be within the ballpark of 18-22 inches of vacuum.

Next, have an assistant gently rev and hold the engine to a higher RPM. You should notice your engine’s vacuum readings fall slightly, before rebounding to a somewhat higher threshold than previously observed. Any failure of these readings to rebound would be highly indicative of a clogged catalytic converter.

For further confirmation, a vehicle’s exhaust can be separated just ahead of the catalytic converter, or alternatively, an upstream O2 sensor can be removed.

After making such modifications, a vehicle can be started, and the abovementioned tests repeated. If the results of this testing now prove satisfactory, you can rest assured that your vehicle’s catalytic converter is the source of your issues.

Can a Clogged Catalytic Converter Be Cleaned?

A clogged catalytic converter can indeed be cleaned, assuming that this clogging is relatively minor in nature.

In certain minor instances, a clogged catalytic converter can be partially cleared by doing nothing more than driving a vehicle for an extended period of time at highway speeds. This allows the affected catalyst to clear itself to a certain degree.

Alternatively, a host of application-specific catalytic converter fuel additives are now available. Cataclean is one such product that has a good reputation in the industry.

Can a Bad Catalytic Converter Be Fixed?

If a catalytic converter has failed, due to the degradation of its internal media, a repair will not be possible. Likewise, a converter damaged at the hands of a debris strike is also unlikely to be salvageable.

Only small structural defects can be repaired to a satisfactory degree, though even this might prove somewhat costly.

However, a minorly restricted catalytic converter can often be saved, through one of several different means. Some of the most noteworthy of these means include the use of specialty fuel additives, as well as off-vehicle cleaning. These treatments are most effective when clogging is still relatively minor.

Is a Bad Catalytic Converter Worth Anything?

Even failed catalytic converters tend to bring a pretty penny in scrap, due to their internal composition. Catalytic converters, by design, feature several precious metals, many of which fetch a premium price on the open market. Some of the most valuable of these materials are platinum, palladium, and rhodium.

In many inner-city areas, it is not uncommon for thieves to quickly remove catalytic converters from beneath vehicles in a parking lot, with the use of battery-operated power tools.

Steve is a former ASE Certified Technician and holds a degree in automotive service technology from Weber State. When he’s not searching for a 10mm socket in his garage, he enjoys a good BBQ with family and friends.