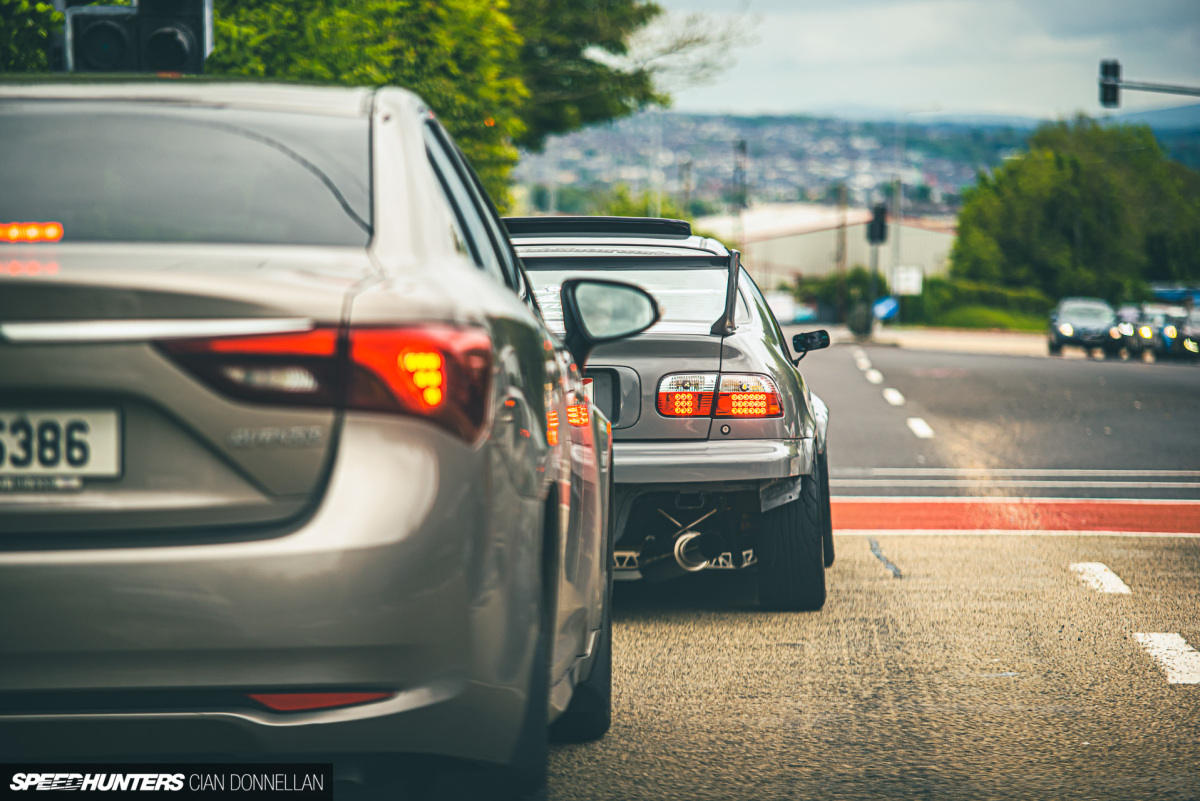 Amongst everyday traffic this Honda Civic is a wild sight; every angle and shape has been exaggerated to levels so far beyond the regular commuter fare. It’s no surprise then, that the second I saw it blitz past me through congested Friday afternoon traffic I had to hunt it down immediately.

That hunt led me to Brian Desmond, and an afternoon spent in the presence of his EJ2 Civic coupe. This provided an opportunity to chat about the progression of what has been a lengthy build, the boundaries being pushed in terms of style, and his voyage into the world of Honda ‘H2B’ swaps.

We’ll get to the performance upgrades in a moment, but first the aggressive exterior that caught my eye in the first place.

There’s a lot to talk about with regards to the way the Civic looks, but the defining feature has to be the facelift, which is actually more of a total face reconstruction. The Civic-to-Integra front end transformation was achieved using Honda OEM 98-Spec DC2 Type R headlights, bumper and grille, plus a J’s Racing carbon fibre hood and custom front fenders.

The fenders, originally factory steel items, are now vented and pumped out +50mm on both sides, and it’s all done in steel.

Brian and his local bodyshop can be credited with that work, and also the modifications made to the Type R front bumper so that it matched up to the fenders seamlessly. The bumper now also features a carbon intake, First Moulding front lip, and below that a homemade splitter.

The side profile benefits from BYC side skirts and classic APR carbon fibre mirrors, while the stock rear fenders have been custom-modified with steel lips from the front fenders of a later-model Civic. Once all the bodywork was finished, the entire car was resprayed in Audi’s iconic Nardo Gray.

At the rear, a Mugen Gen 2 wing grabs the eye first, its towering presence extending from the boot deck. Then you notice the half-cut bumper, Beaks rear lower tie bar, and the shot-gun style Solidfab exhaust. Which brings us nicely to the swapped powertrain…

For all of its aggressive exterior elements, Brian’s Civic has all the go needed to back up its wild style. How he’s gone about creating the performance is a little different though.

In upgrading from the EJ’s factory-fitted D-series engine, Brian chose to forgo the expected B or K-series swap, instead taking a more unique route by fitting an H22A from a BB-series Prelude. That’s the ‘H’ in ‘H2B’ – the ‘B’ comes from the B-series transmission used, in Brian’s case an S80 5-speed LSD-equipped unit fitted with a 4.7:1 final drive and running an Exedy Racing clutch and flywheel.

The 2.2L had already been fully rebuilt when Brian got his hands on it, but he’s added a 1320 Performance balance shaft delete kit, 70mm throttle body and K-Tuned inline fuel filter and braided hoses. Factor in the custom intake 1320 header and full exhaust, and the engine is reputed to be making around 250hp, which is plenty for a lightweight Civic street car. The tune was completed by Cian Walsh Motorworks, a name synonymous with high performance Honda tuning in Ireland, and whose work I’ve featured previously.

The suspension has seen plenty of upgrades, including Yellowspeed coilovers mated to Hardrace front and rear camber arms, a Whiteline anti-roll bar and Function 7 billet lower control arms. Furthermore, the EJ chassis has been stiffened up with a full course of Ultra Racing braces. In the brake department you’ll find EBC discs, PBS ProRace pads and stainless steel braided brake lines throughout.

For wheels, Brian has gone with a set of 15-inch Enkei CPS-2s, which have been custom refinished in blue. The Enkeis are a cult wheel within Honda circles, and are a perfect choice for this build, especially given they’re now wrapped up in sticky Toyo Proxes R888R rubber.

Stepping inside, it’s all fast-road spec with the key driver interaction points having been updated. The seats are old school Brides, the wheel is from OMP and the gear shifter is a K-Tuned item.

This Integra-faced and Prelude-powered Civic coupe was built for fun, and standing out, of which it definitely does in traffic. It’s no show queen and has the scars of everyday use to prove it.

It made me smile the day I first saw it, and I know it makes Brian smile every time he bashes the redline on the local ring road. And really, that’s all that matters.

More stories from Ireland on Speedhunters