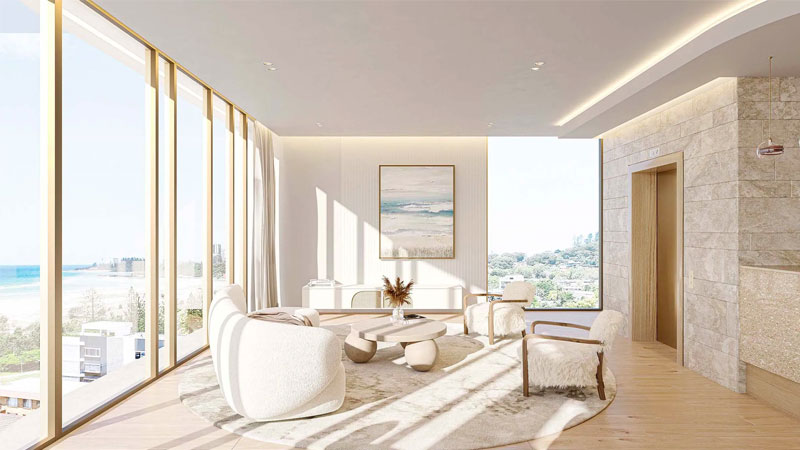 Brisbane-based developer Cielo Group has lodged plans for a boutique apartment tower in Bilinga, its second project on the Gold Coast.

The 1000sq m beachfront site at 90-92 Pacific Parade, currently occupied by two low-format homes on two allotments, will be redeveloped into a 10-storey residential block.

The development will offer 18 three-bedroom apartments—three per level across the building’s lower levels and two per level across its upper levels— as well as a single four-bedroom penthouse.

It will be topped with a rooftop deck with plunge pool, gym, dining room and amenities.

The developer is familiar with the famed esplanade that connects Bilinga Beach with Kirra Beach—it has plans for a similar six-level project on 500sq m site nearby at 55 Golden Four Drive.

That project, which was recently launched through CBRE, comprises five full-floor, three-bedroom apartments and include open plan kitchens, living and dining space, and east-facing balconies.

It also has 200sq m of rooftop amenity including a swimming pool, barbecue area and outdoor dining.

Both projects will be a short walk from a 19-storey residential tower planned for a 1000sq m site on the corner of McLean and Musgrave streets, one block back from the beach, which is being overseen by local developer Greyburn.

Its latest project at Pacific Parade will likely be its last on the Gold Coast for the foreseeable future with O’Donnell citing soaring land values and construction costs as potential roadblocks for developers looking to cash in on the region’s current boom.

Sky-high construction costs and crippling labour shortages have put the crunch on off-the-plan developments, which are being dumped before they get out of the ground in the face of multi-million-dollar cost blowouts.

Building demand and supply chain issues have pushed the cost of construction materials up significantly in the past 12 months on the Gold Coast.

Propelling demand for new development has been record house price growth on the Gold Coast, increasing by 36 per cent in 12 months, which in turn has pumped up land values by almost 40 per cent since 2020.

Cielo Group, which has its own construction arm to builds its own projects, is known for its projects around inner Brisbane, namely Bulimba, Hawthorne and Newstead.

Earlier this year, the developer lodged plans for a prominent 1150sq m site at 360 Riding Road at the top end of Oxford Street, the first of a number of transformative projects it is planning for the popular, yet ageing, dining precinct in Bulimba.

The $35-million project will include a ground-floor cafe and will be topped with a 750sq m rooftop deck with pool and public bar, both of which Cielo Group intends to retain and manage.

It will offer eight two-bedroom and six three-bedroom apartments.

At a nearby site at 52 Main Avenue in Balmoral, four blocks from its Riding Road project, Cielo Group has plans before the council for a similarly scaled project, dubbed Hyperlux, will feature four-bedroom apartments and will also have a rooftop terrace.

Backing up its ambitious intentions for the broader Oxford Street precinct, Cielo Group has also settled on another larger site at the centre of dining strip, between 187-191 Oxford Street.