Into the Woods: A Hot Rod Camping Story

Long before I built my car, I dreamt of taking it on a road trip. Not a trip across town, not a trip to the next town over, but an honest-to-goodness hot rod adventure. One like I read about as a kid. We’re talking backroads, scenic views, strange characters—the works.

When I heard my brother Andrew was flying in from Michigan, my friends and I decided there was no better way to celebrate than with a camping trip. “Let’s take the roadster,” I suggested. “It’ll be our own Northern California Reliability Run.”

Our plan was a straightforward one. Load up my 1930 Ford Model A with camping gear, snacks, and a handful of tools and hit the road. The car itself is 1940s traditional, complete with a hopped-up Model A four-banger, mechanical brakes, 1935 Ford wires and bias ply tires.

The roadster’s body is original Henry Ford steel, and the windshield was chopped by an East Coast hot rodder more than half a century ago. The car is a little bit rough, plenty loud and a whole lot of fun. For the past two years it’s been my San Francisco daily driver. Yes, even on the hills. 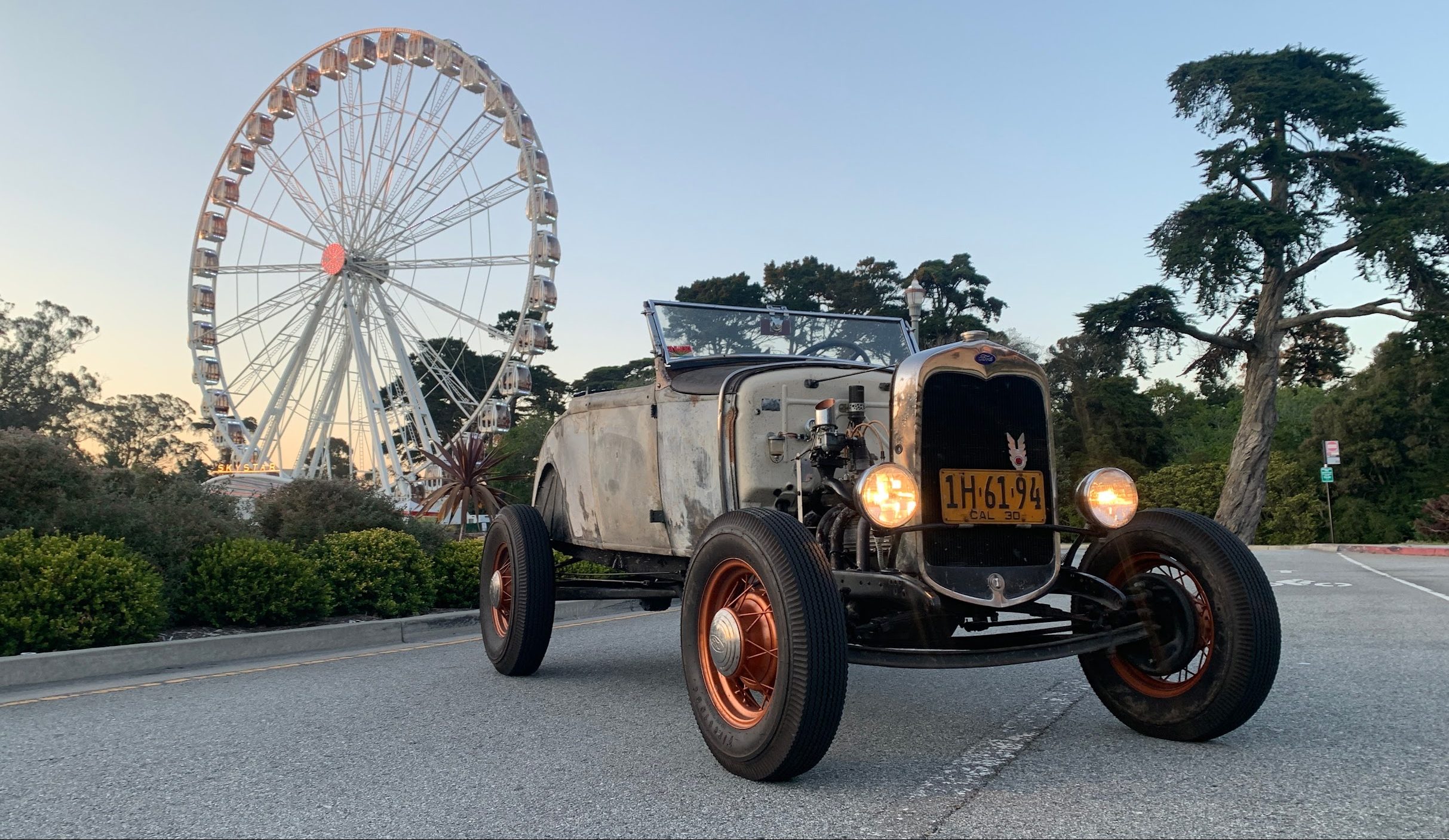 With regular usage comes regular maintenance. On Andrew’s first day in town, we rode through the rain on vintage motorcycles to pick up some essential hot rod oils. For a small fortune, we cleaned the parts store out of 30 weight and threw in a couple bottles of gear oil for good measure. For the ride home, we loaded the bottles into a well-worn duffle bag, strapped it to a sissy bar and got rolling.

Moments later, we were back at the garage. Coveralls zipped. Music on. As the rain fell and the neon buzzed, we spent the next hour prepping the car. I showed Andrew the finer points of draining a banjo, and he greased all the zerks with a Stewart-Warner grease gun that I got at a garage sale in San Francisco’s Sunset neighborhood. (The seller told me that he used that very gun on his dad’s ’55 Buick when he was a kid.) When the car was ready, we were too.

The night before the trip, I studied routes. Our only objective was to make it to Samuel P. Taylor State Park by dark. I weighed our options. The inland route would be shorter, but the costal route offered scenic views of Mt. Tamalpias and the Pacific Ocean. I read the names of landmarks on the map. Slide Ranch. Steep Ravine. Devil’s Gulch. There’s no doubt that the latter route would be more challenging so, naturally, that’s the one we chose. 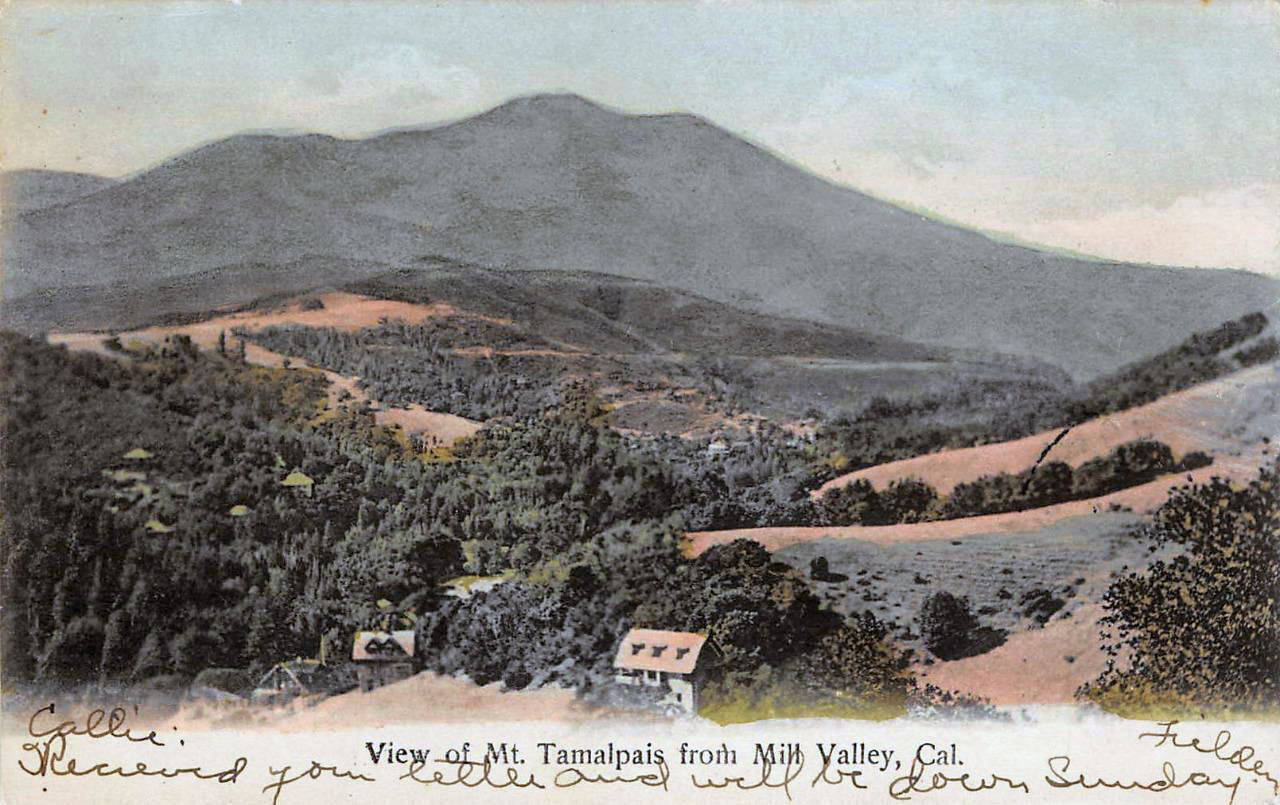 On Thursday afternoon, we hopped in the roadster and tore away from the Terrace. After quick stops for groceries and gas, we sailed through the Inner Richmond and set our sights on the Golden Gate Bridge. Lane by lane, I shuffled my way into the seemingly endless flow of traffic. Out on the 101, people smiled and waved at those two guys in strange hats driving a 92-year-old hot rod.

Crossing the bridge, Andrew and I cheered. “Yesssss! We’re really doing it!” The car clipped along in third gear, and I took a moment to take it all in. The ocean on my left. The Bay on my right. San Francisco in the rearview, and the great unknown up ahead. Best of all, I had my brother right there beside me. 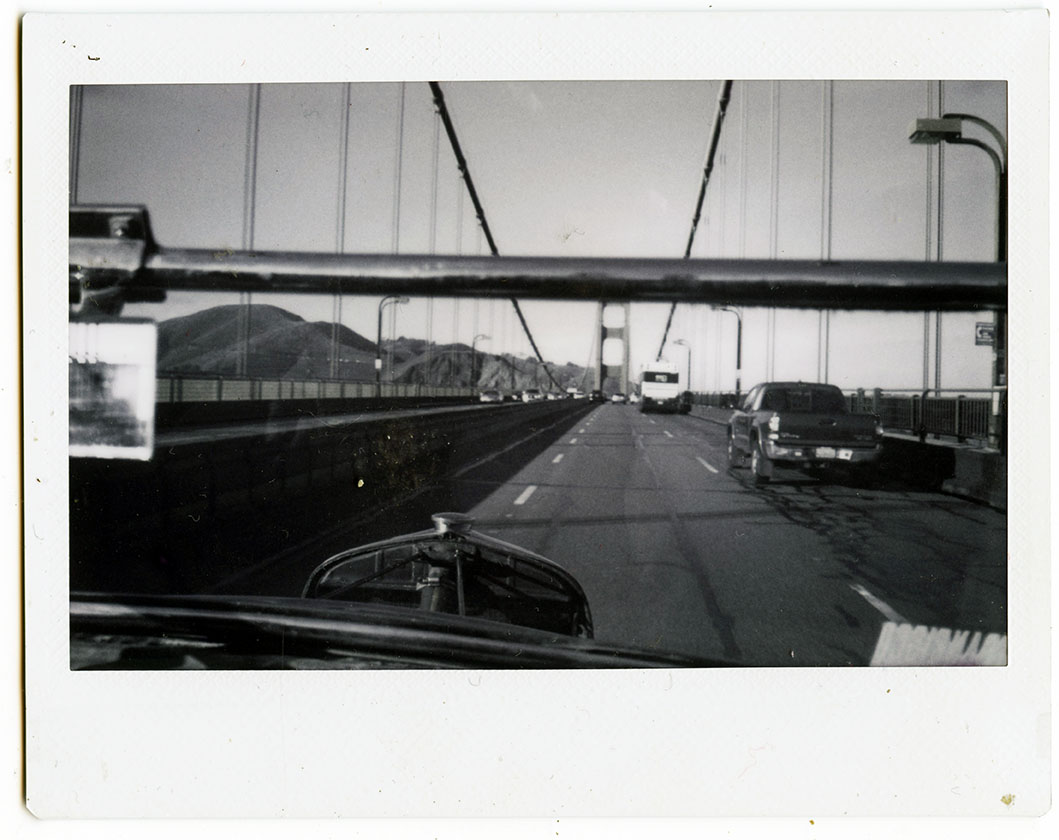 As you very well may know, driving a ’banger-powered hot rod in modern freeway traffic has its drawbacks. Nonetheless, Andrew and I kept our cool as we climbed hills at our own pace. “No rush,” I said. “We’re in no hurry.”

Hill after hill, that little 200 cubic-inch four chugged away without missing a beat. The Stromberg 81 loved the cool ocean air, and we did too. Once we left the fluorescent glow of the Robin Williams Tunnel, we started our long, winding descent into Sausalito. “Check it out,” I said, pointing south. From the roadster’s cabin, we had a clear view of everything from the jagged peaks of the city skyline to the depths of the San Francisco Bay.

Under blue skies, we weaved our way onto Highway 1. We wound up steep crests and coasted right on down with straight pipes popping. We could smell the oil and grease mix with the scent of eucalyptus. Sunlight glinted off the stainless radiator shell as we made our way north. Just like Revell advertised in the 1950s, we were the Highway Pioneers. 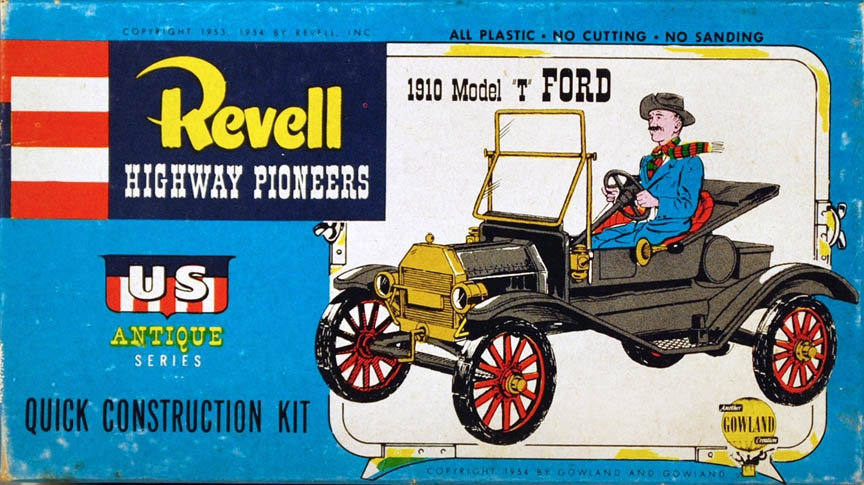 Sometime along the route, we spotted a sign for a scenic viewpoint. We paused, looked at each other and nodded. “If not now, when?” I asked. I parked the car next to a World War II bunker and unfolded myself out of the driver’s seat. “What a view, what a view.” 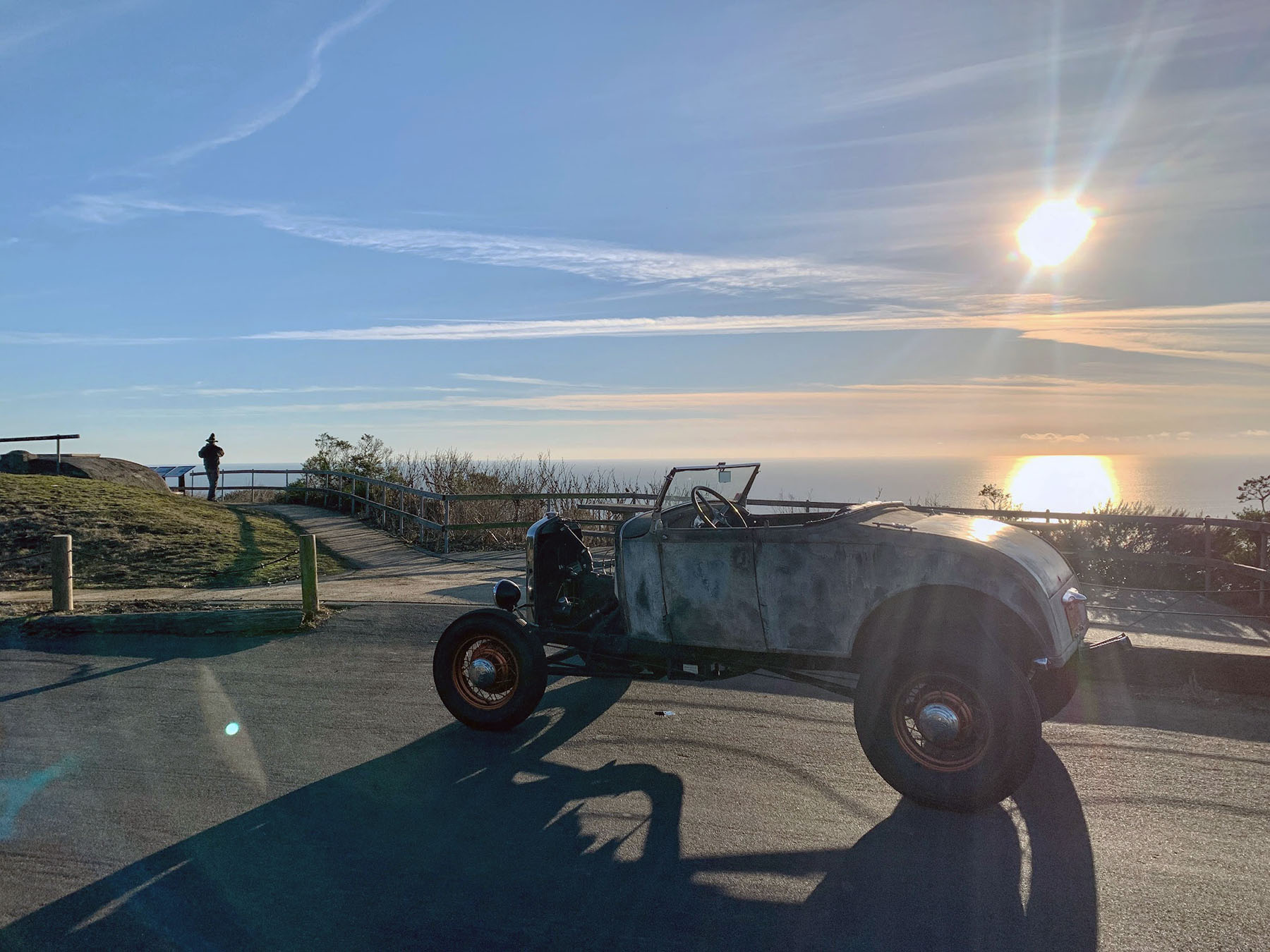 Andrew walked to the edge of the overlook, peering towards the horizon. As he did, my mind skipped back to one of our motorcycle trips during our Virginia days. Back then, it was vintage Hondas and the Atlantic. Now, it’s hot rods and the Pacific. So much has changed, yet so much has stayed the same. 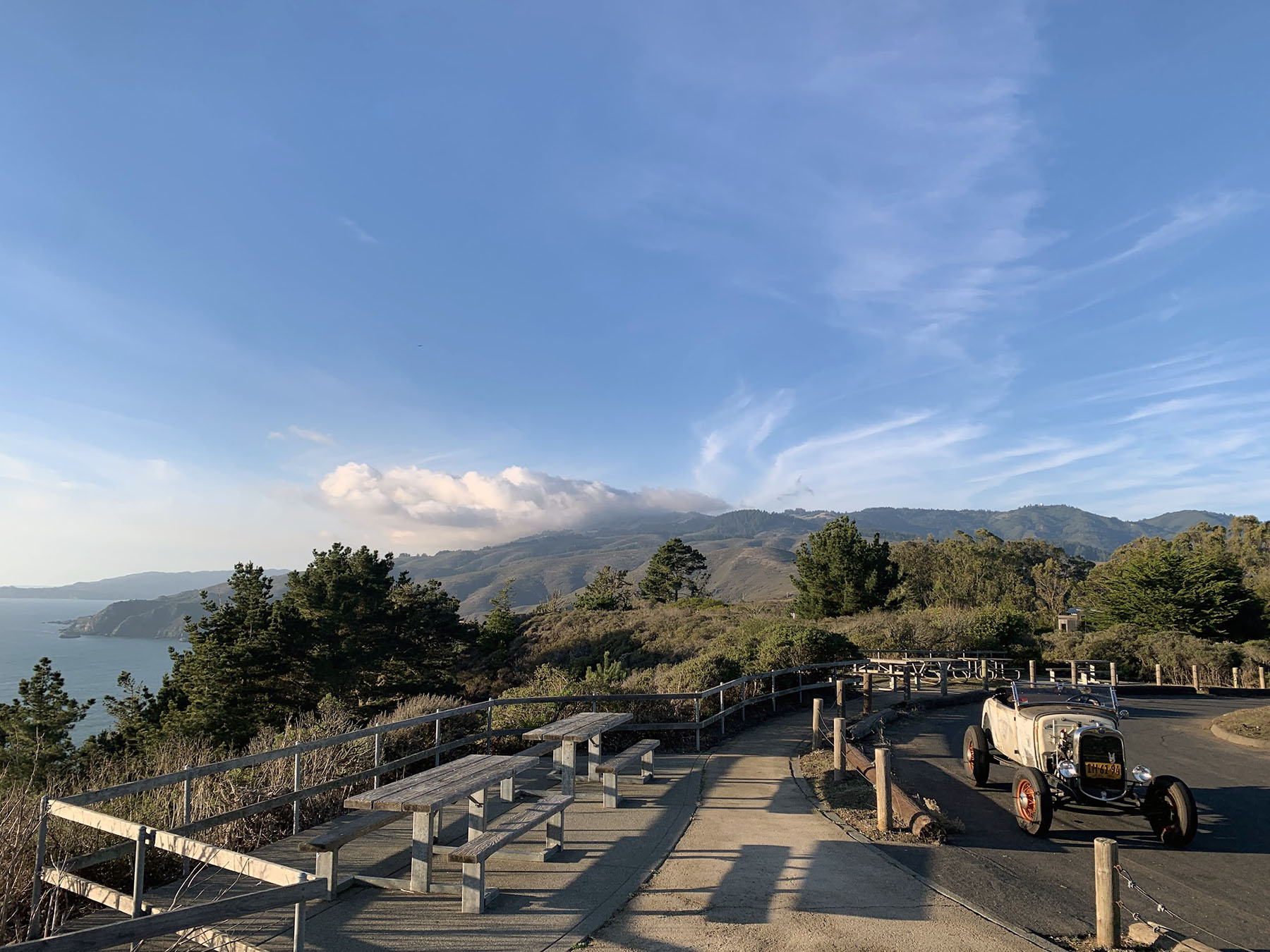 During our stop, I gave the car a once-over. Nothing seemed out of place, so I pulled a bag of barbecue chips from the trunk. “Perfect time for a snack,” I said. I couldn’t think of a more picturesque place to eat them.

Turn by turn, the A knocked down the miles. I spent a great deal of time in second gear climbing, and then allowing the compression to slow us on the way down. Andrew later noted that I hardly ever touched the brakes throughout the course of the whole trip.

We especially enjoyed our time on the flats, cruising on smooth roads as we watched the sun set over the marshlands. Out on the rolling hills, we greeted cows with a blip of the “OOOWGAA” horn, waving and cracking up every time.

As we cut through the forest, I noticed a car on our tail. “Oh man,” I said. “I’ll find the next turnout and let them pass.” As I pulled onto the dirt shoulder, I waited a minute to create some space. Out of nowhere, white smoke started billowing from the engine. I jumped out of the car to see what was happening.

I thought I smelled oil, but nothing appeared to be wrong. Then I looked underneath the roadster. “Ahhh ha!” We had parked over a puddle, and the occasional drop of hot oil was causing the smoke. We laughed, fired up the car and got back on the road. 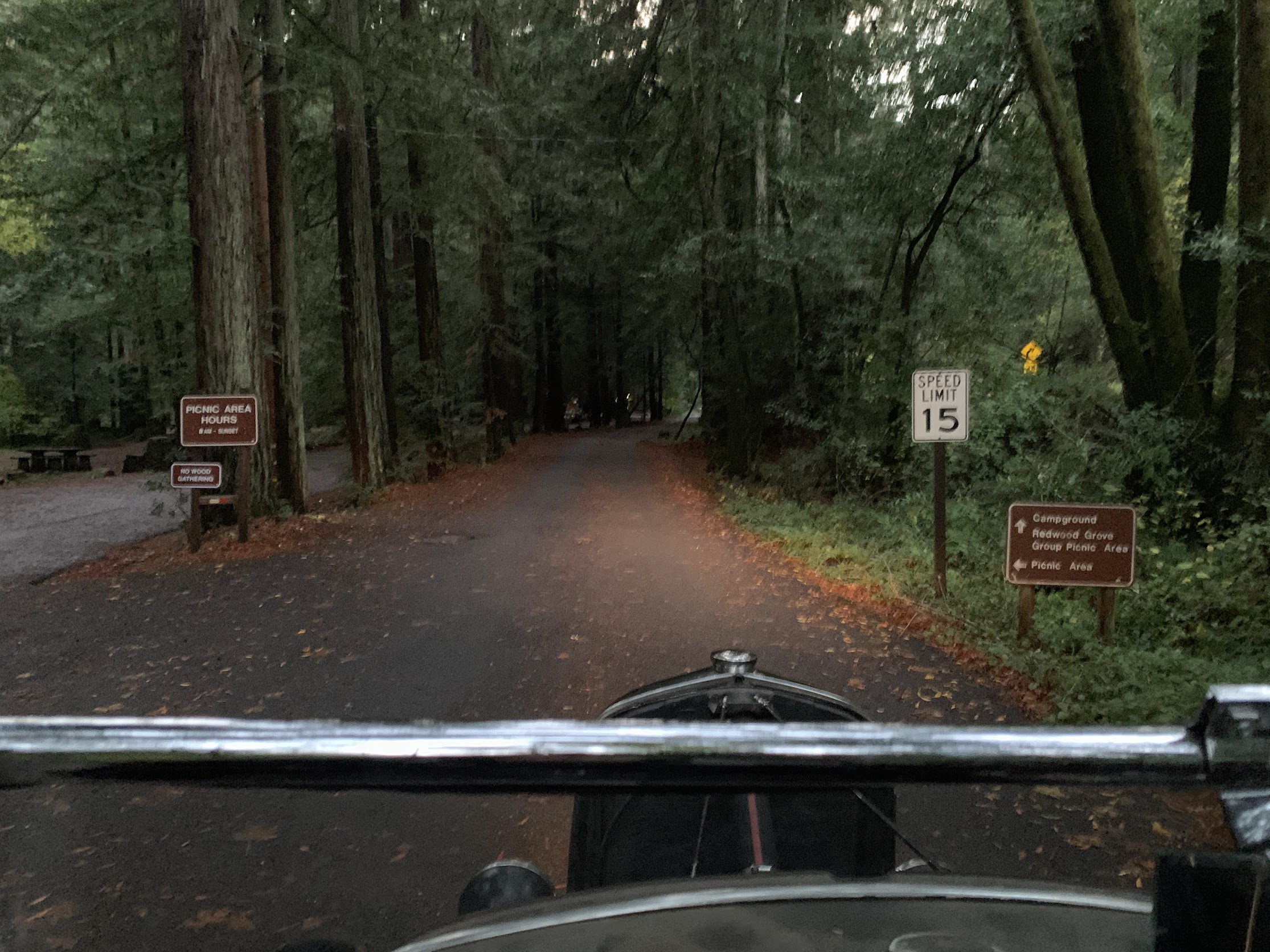 Pulling up to the campground, we couldn’t believe that the first leg of the trip was already over. Even though I tried to savor every moment, it seemed as if it all went by too fast. Remembering one of my favorite photos of Ye Ol’ Joe Barnett in Rodder’s Journal #17, I parked the car in front of the ranger station. “Rustic,” Andrew said.

He was right. The roadster’s color palette complemented its surroundings perfectly. The copper wheels matched the pine needles on the shingled roof, and the gray and tan of the body looked right at home among the bark of the old-growth trees. 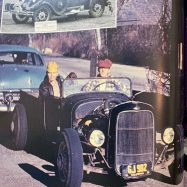 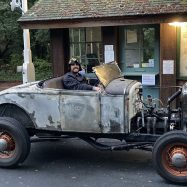 The remainder of the night was filled with the type of fun only camping can bring. Highlights included chili dogs on the fire, tall tales, traditional beers, dance moves, ultra-late bedtimes and waking up with the sun. Everyone had an absolute blast, and it felt even better knowing that my homebuilt Model A hot rod brought us there.

When we awoke the next morning, the air was cold—37 degrees to be exact. We packed up our gear, finished cleaning the site and jumped into the roadster. To keep things interesting, we took the inland route, moving through the redwoods and enjoying everything the road had to offer. For the record, 7-Eleven pizza at 7 a.m. has never tasted better.

The trip home went even quicker than the ride there. Everything worked excellently, and our only stop was for gas somewhere along the way. We were back on Loyola Terrace in no time at all. Tired, dirty and happier than ever. 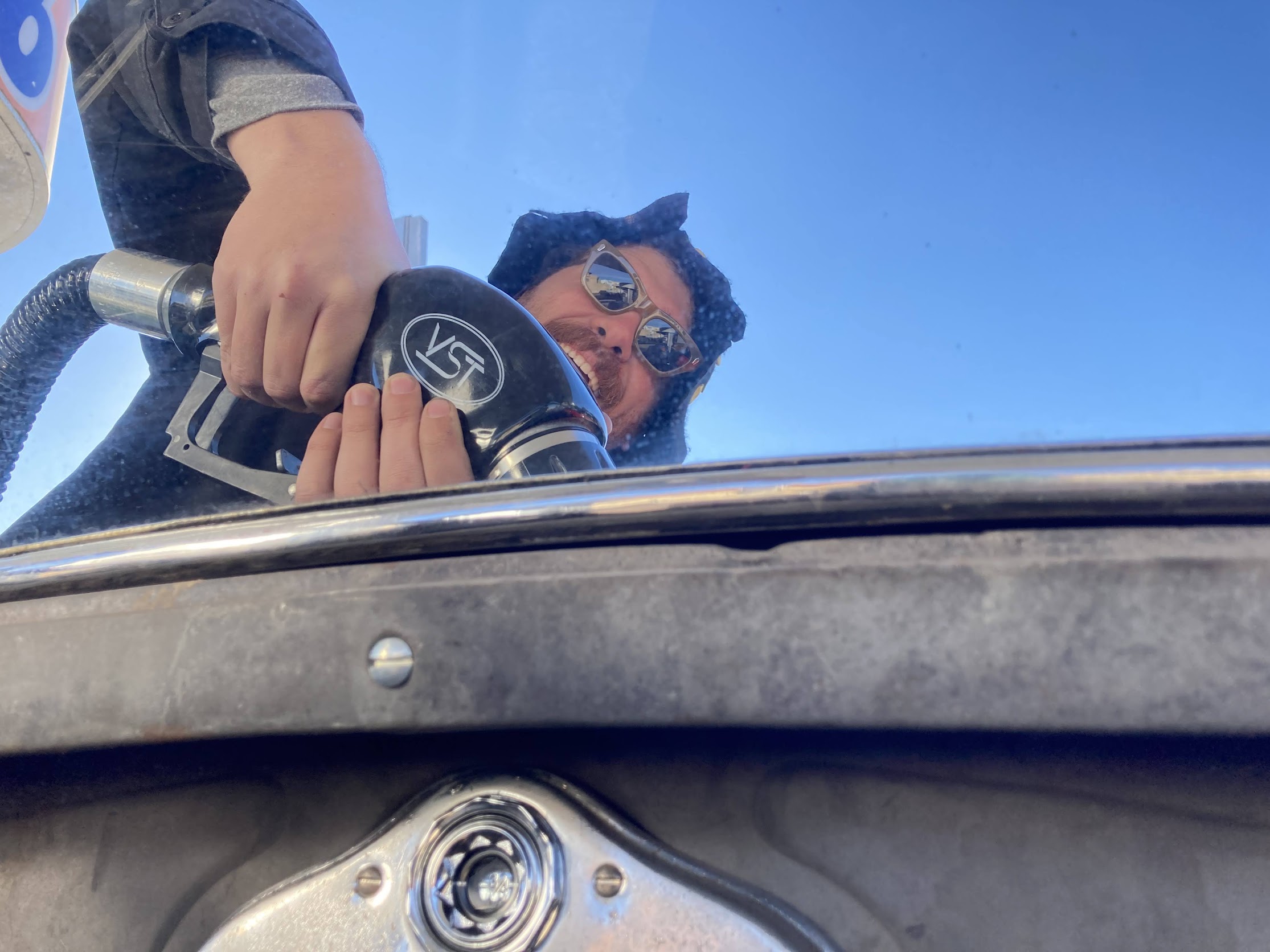 Nearly a week has passed since our Northern California Reliability Run. Andrew is back in Michigan where the snow has already started to fly, and I’m back at my desk writing stories, editing photos and trying to put all the pieces together.

At this point, the whole experience hasn’t fully sunken in. Being out there on Highway 1 in my roadster with my brother felt like some sort of dream—familiar, yet strange at the same time. It was all almost a little too good to be true. 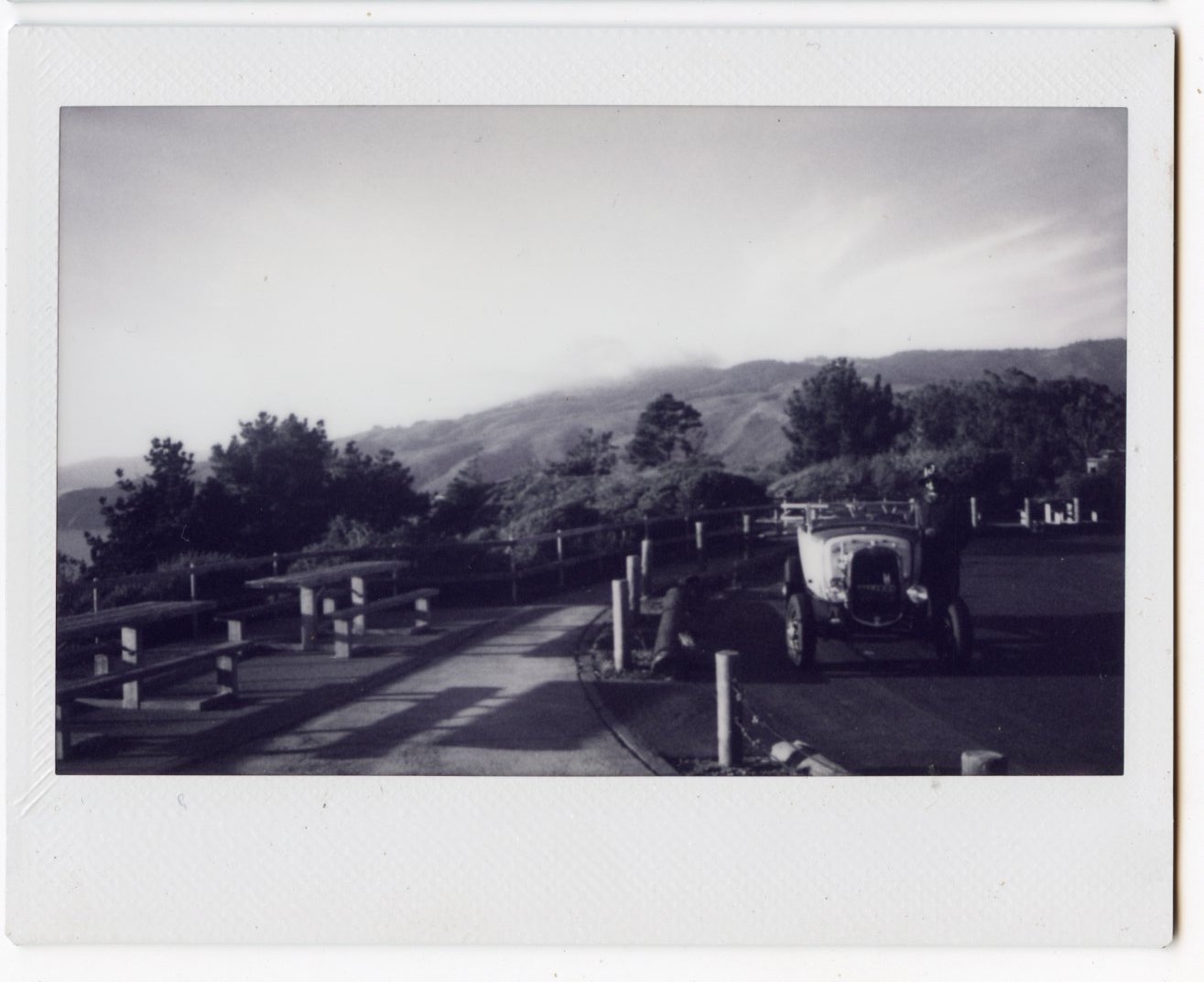 In Andrew’s neighborhood, there’s an older couple who has a series of hand-painted signs that they hang up in front of their house. Their messages vary each week, but there’s one sign in particular that I always think back to. In shaky red letters, it reads: “These Are the Good Old Days.”

That’s never been more accurate. These really are the good old days. 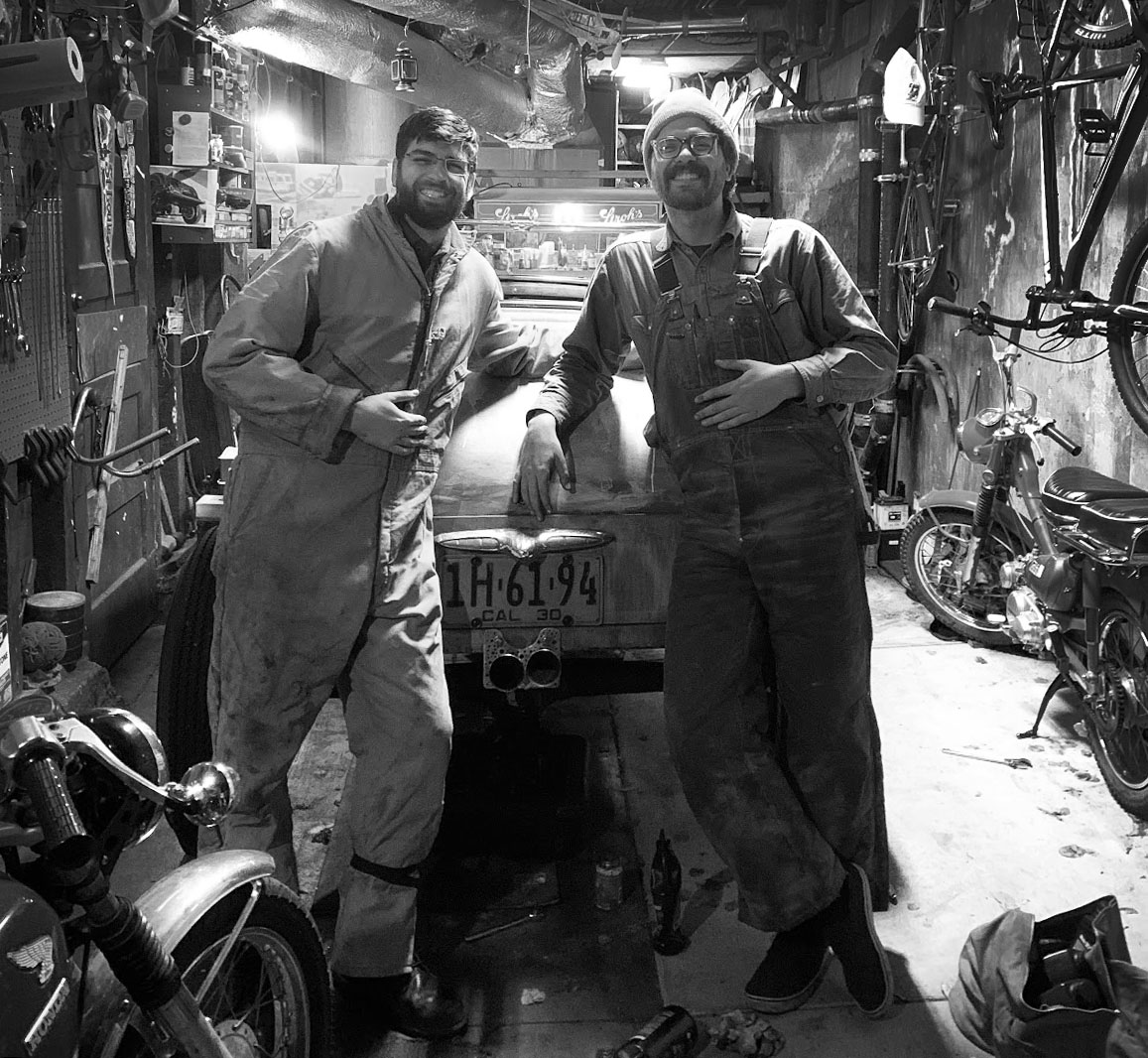 Now, for a video by Andrew Ukrop. He’s also responsible for much of the photography in this article, which was shot on Instax film and 35mm. Mt. Tam postcard from eBay, and Revell box art from Model Roundup.