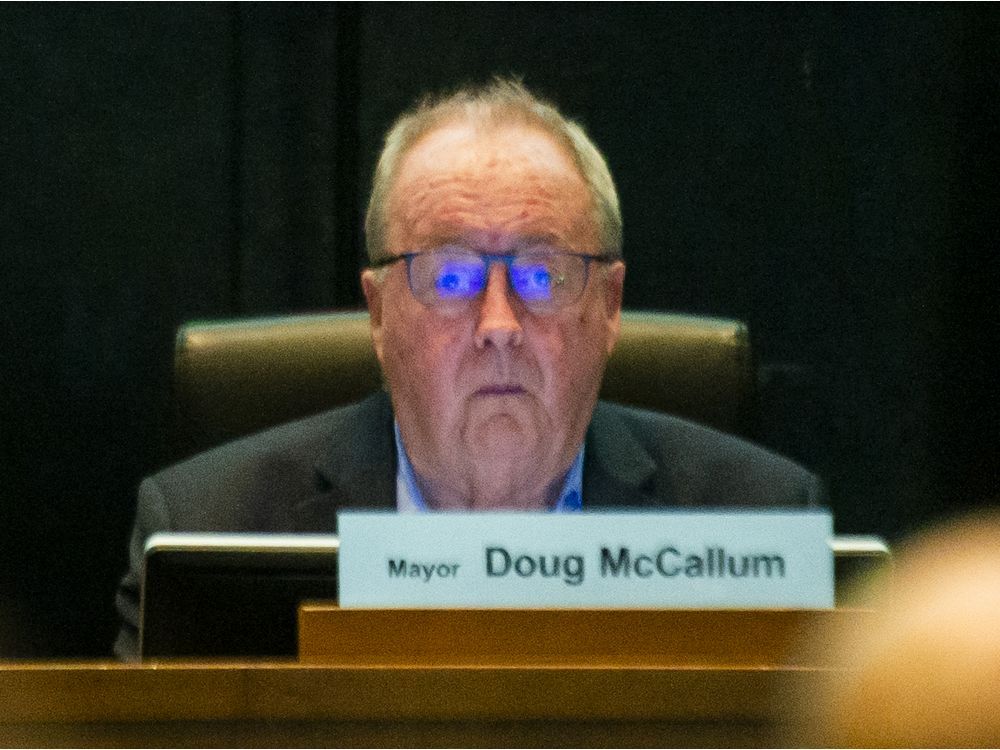 Statements in court documents related to Surrey Mayor Doug McCallum’s mischief trial appear to refute the mayor’s version of an altercation with opponents on Sept. 4, 2021 in a Surrey Save-On-Foods parking lot.

McCallum reported a hit-and-run to Surrey RCMP outside the Save-On-Foods store on 152nd Street and gave a statement to police that he was “pinned between” two vehicles, according to the documents, which were released to Global News.

The mayor was later charged with public mischief for his statement to police over the altercation, which was with members of a group collecting signatures on a petition that opposes one of McCallum’s pet political projects.

In the statement, McCallum told police the driver of the vehicle, a prominent member of Keep the RCMP in Surrey, a citizen’s group opposed to the mayor’s plan to transition Surrey to a municipal police force, had pulled up to him after he had parked his car.

McCallum told police that driver then “floored” her car to leave and ran over his foot as she pulled away, according to the document.

However, the police document, an information to obtain evidence through search warrants, filed as part of the investigation, notes that “video surveillance shows that McCallum was not pinned up against a vehicle,” when the other driver pulled up to him.

Instead, it said the video shows that McCallum had been walking across the parking lot and shows that “McCallum turned around and walked over to (Debra Johnstone’s) car.”

As for McCallum’s statement that she “tore” away, the video “shows Johnstone slowly roll through the right hand turn and then proceed at a normal speed through the parking lot,” the police document said.

Global News successfully challenged a court order that sealed the information-to-obtain documents over the risk that disclosure “would jeopardize the conduct of the investigation.”

Last week, a judge granted Global’s application to unseal a redacted set of documents, which the news outlet embedded copies of in its coverage of the story.

Media lawyer Dan Burnett, who represented Global News, told the outlet that releasing such documents was a matter of public interest in a high-profile case.

The case, which is set for trial Oct. 31, two weeks after the next municipal election, hasn’t been proven in court, but in the information-to-obtain evidence, investigators seek a search warrant to obtain the running shoe that McCallum was wearing to examine for physical evidence.

McCallum has refused to comment on the matter, but the case has been a source of acrimony in Surrey.

The mayor refused to step down as chair of the Surrey police board while the matter was before the courts and citizens have petitioned to try to stop the city from picking up McCallum’s legal fees during the matter.

More news, fewer ads: Our in-depth journalism is possible thanks to the support of our subscribers. For just $3.50 per week, you can get unlimited, ad-lite access to The Vancouver Sun, The Province, National Post and 13 other Canadian news sites. Support us by subscribing today: The Vancouver Sun | The Province.

Sign up to receive daily headline news from the Vancouver Sun, a division of Postmedia Network Inc.

Thanks for signing up!

A welcome email is on its way. If you don’t see it, please check your junk folder.

The next issue of Vancouver Sun Headline News will soon be in your inbox.

We encountered an issue signing you up. Please try again