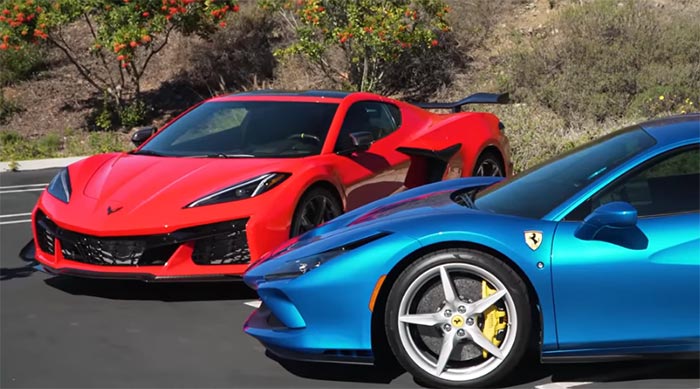 It’s no secret that Chevy benchmarked Ferraris, especially the 458, as it was engineering the 2023 Corvette Z06.

Now, YouTuber Speed Phenom – whose enthusiasm for Corvettes in particular and exotic sports cars in general is contagious – takes the first up-close look in his latest post at his new 670-horsepower naturally aspirated Torch Red Z06 vs. a twin-turbo, 710-horsepower Corsa Blue Ferrari F8 Tributo owned by his friend, Justin.

After spending time on twisty mountain roads in both cars, the two enthusiasts openly talk about their likes – and dislikes – in an entertaining 30-minute video. Believe it or not, despite the $350,000 price tag of the Ferrari and the $185,000 cost of the Z06, there ARE some minor complaints, though we get the feeling they had to struggle a little bit to find them.

For example, Justin points to the limited ingress/egress of his Ferrari as a minor complaint, noting that because the door doesn’t open wide enough, he’s left some scuff marks on the door panel getting out. He also says the F8 feels “a little delicate … I feel like if you hit a bump too hard something’s [might get knocked off], but otherwise it feels fairly drivable, fairly bulletproof.”

He believes the F8 is “a more comfortable car” than the Z06, felt “a little bit more refined,” and might make a better daily driver. 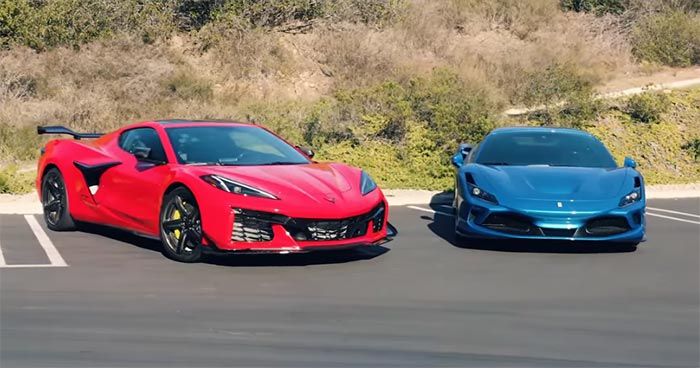 Justin praises the raw visceral feel of the Z06, noting that it was also “very luxurious” and had “a ton of performance incorporated into it where you could technically daily drive it all the time” though “it felt so aggressive that perhaps you wouldn’t want to.”

Speed Phenom likewise believes the Z06 checks a lot of boxes, but at the same time he wouldn’t mind seeing a more stripped-out future model to focus more on the raw driving experience.

“There’s a thousand good things to say,” SP summarizes, “and we barely could come up with two to three negatives to say, which these negatives really don’t apply I don’t think to your buying decision too much. It’s just our personal thoughts.”

In short, it’s obvious that the new Z06 may not have the prestige that comes with owning a legendary Italian sports car like a Ferrari, but nevertheless it can more than hold its head high when it comes to performing against vehicles like Ferraris and Lamborghinis.

Since most of us will never have the pleasure of driving any of these vehicles, we can at least live vicariously through Speed Phenom and Justin.

[VIDEO] Just How Loud is the Exhaust from the 2023 Z06? Speed Phenom Has The Answer!